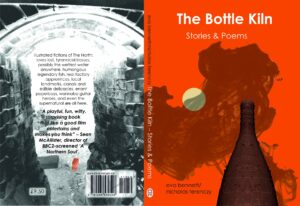 April 2018 saw the publication of a collection of illustrated poems and short stories entitled ‘The Bottle Kiln – Stories & Poems’ written jointly by Eva Bennett and Nicholas Ferenczy. (There are two short stories by Eva Bennett and the remainder is written by Nicholas Ferenczy – who also illustrated the collection.) Described by Sean McAllister, director of BBC2-screened ‘A Northern Soul’ as: “a playful, fun, witty, surprising book that like a good film entertains and makes you think.”

Many of the so-called ‘poems’ fall somewhere between poetry and prose – often narrative and poetic in style if not formal poems. The book contains content from ‘Oscar the Pike’ plus a great deal of additional new stuff. The illustrations include hand drawings, digital imagery and photography of UK Northern life, all seen from a slightly ‘sideways’ view.

Though some of the p 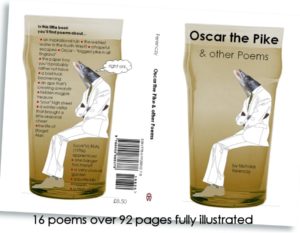 Keen to in some way illustrate the poems without simply duplicating what is said by the text, I looked to graphics starting as photos taken in and around the Potteries of Stoke-on-Trent. These then underwent various changes digitally, until I had something that ran in parallel to the text either as sympathetic abstract narrative (in the case of ‘Oscar the Pike’) or as mood-setters. Further drawings were added – the magpies, for instance, to the poem entitled Finders Keepers, the ape silhouettes through The Creative Ape, and the rather quirky (schoolboy-jotter-type drawings) characters in the bus stop queue (that I hope are fun!) in 50 Years On.

Here’s how Foxlowe Arts Centre (Leek) billed it at the reading gig there…Factory apprentices, mythical fish, informal after-school sports, local landmarks and the changing face of the ‘our’ local high street all put in an appearance, as the author uses text and projected drawings and graphics, to share some experiences of growing up in the north-west.