This thread of paintings was prompted by the thought that many (most?) of us spend a great deal of our lives gleaning information from one kind of screen or another – be it from TV, movies, computers or games arcades/consoles. Sometimes I think we virtually live our lives in 2-D. I like movies. I wondered if there wasn’t some way to start exploring this ‘living by proxy’ through the characters and places of movies (and even through the epistemologically skewed ‘non-fictional’ output of news and documentaries) by making paintings from screens. The starting point was simply to render a black and white movie moment in a retro palette of oil colour. I chose Casablanca simply as a kind of ‘paradigm case’ for a movie – an iconic symbol of the idiom. (I guess it could easily have been Star Wars for a different generation.)

By the third, I’d started to combine more than one screen – there, movie with one from a game I used to play (fondly) a few decades back when video games were in their infancy – Galaxian. So now there were like ‘layers’ of screens.

Funny thing with Art is, that unlike Science – which is largely about predictability – in Art you never quite know how things will turn out until you try them. You just have to ‘see where it goes’ – and when I get time, that’s what I’ll do, taking the thread a little further, seeing where it goes… 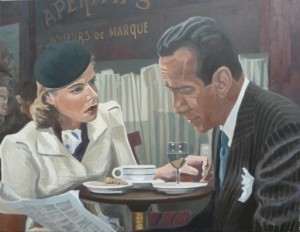 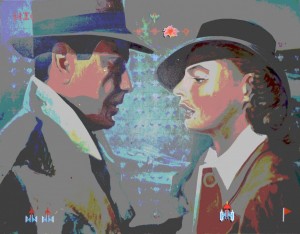 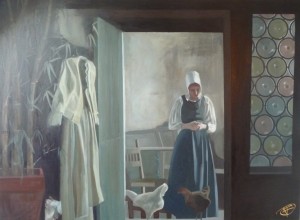