Before starting, ask yourself the following:
1. Does any drapery help the pose or hinder it?

In my experience most life groups usually have a weird assortment of blankets, sheets, drapes and cushions that have been kindly donated over the years. They come in the most outlandish colour combinations and textures. Chosen and used without thought, furnishings can confuse and spoil a pose.

Obviously cushions and pillows are used to make a pose tolerably comfortable for the model. But if they’re not serving that purpose and don’t help the pose, dispense with them. 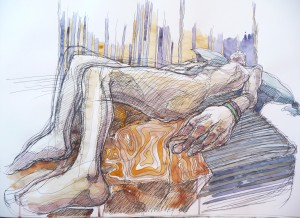 Classically, drapery was used to harmonize and to contrast with a figure. It can still be used to good effect – sharp-edged angular creases provide a nice contrast to the curved forms of a figure, for instance – and a sheet of (say) a single warm colour can be used to throw warmth on to the skin as the colour is reflected from the skin. Drapery can add interesting textures and shapes within the design, so that it is not merely incidental to it. 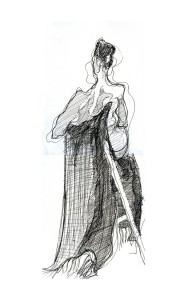 But watch out in particular for drapery ‘cutting off’ a foot or hand, fingers or toes, or obscuring the outlines around the perimeter of a reclining figure. The same is true of cushions into which a model is apt to sink, so that contours become lost.

Although you can capture the form of a figure entirely in line, more often than not you’ll want to describe it tonally too– perhaps by combining line with shading, hatching or with paint, for instance.

Pretty early on you need to be aware of the main light sources. Is it coming overhead from a bulb or cutting across obliquely from a window? Is there more than one source (often there is)? 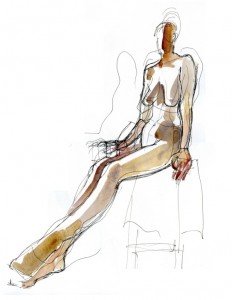 Mood and drama can be created by light hitting the figure and the shadows that the forms create, as well as by the ambient lighting around the room – a technique known as chiaroscuro. (To see examples of this, take a look at the paintings of Caravaggio, Joseph Wright of Derby, George de la Tour.)

3. Can I see the tones clearly?

If you can’t, try hooding down your eyelids so the figure becomes blurred. This way you’ll see only the tones and then you can work out where the main darks and lights come. 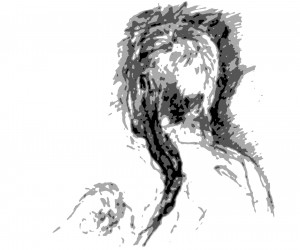 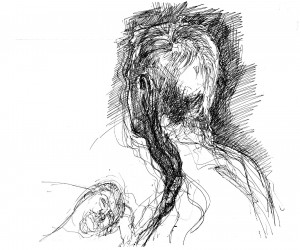 In fairly strong light in a darkish room you can, by rapidly scribbling in the shadows and the background but leaving white areas free, almost ‘pull the figure out of the paper’, and in a very short space of time, capture the mood quite well. You can achieve a similar effect sometimes with a contre-jour (against daylight) pose where most of the figure will be in silhouette with just a few highlights.

This technique of strong, contrasty drawing allied with exaggerated perspective is often used in the illustration of graphic novels, for example.

(To create this effect you need access to a strong light such as from a photographer’s studio lamp.) 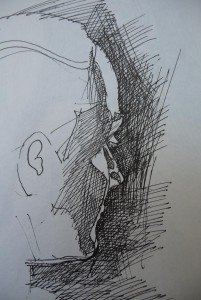 4. How many tones do I need to capture the forms?

In fact the tones shading from one form to another are infinite, but you have limited time. Simplicity is the key. If you have only ten minutes you haven’t time to embark on a complex tonal drawing. Instead, establish quickly the least number tones you can use to describe the forms. Look to the extremes first.

The highlights, where are they and how light should they be? They might be given by the white of the paper. That’s one tone. But this will probably account for only a tiny percentage of the figure. 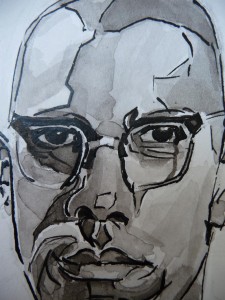 Your darkest dark might be some way off black. So that’s now two tones. Though accounting for a bigger percentage of the overall tones than the highlights, again it will probably be only quite a small percentage.

Now you need the all-important mid-tones. This is where, as always, the devil is in the detail, but you can’t afford to become bogged down in it. You probably won’t get away with one tone. Can you get away with two? If so, do. 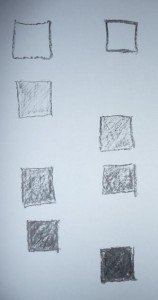 Remember that these mid-tones, as light as they might be, are still shadows. If the light is strong, the mid-tones will be pushing towards the dark end of the range. If the lighting is fairly even – as it often is indoors, then there will be less contrast. In any case, ask yourself: where do the mid-tones fall in the range and how far apart do they need to be?

This approach to analysing and simplifying the tones applies whether you’re using a pencil, biro or paint. With a medium such as charcoal, you can blend tones together to create transitions, as well as removing it with an eraser to take out lighter tones – for highlights, say.

Whilst working, ask yourself the following… 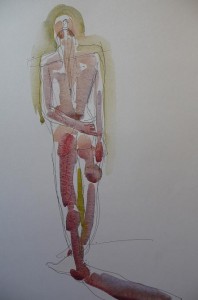 Often in the heat of the moment it’s easy to forget about the shadows on the floor. Pools of shadow coming from a standing model’s feet make the figure look as though it is standing on some THING. If the model is sitting on a chair then the shadows under it will anchor the chair to the floor. Obviously the brighter the light, the stronger will be the shadows.

2. Have I considered how the figure relates to a background?

A little work on the background will help to pull your figure forwards in some places or, when the tones of figure and background are similar, lose a contour. 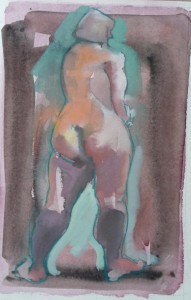 These so-called ‘lost and found contours’ can be very effective because our visual apparatus – the way we perceive things – tends to be stimulated by boundaries.

3. Am I giving due attention to anatomy, to what lies under the skin?

You don’t have to be an expert in anatomy to make a very good work of art and certainly a good grasp of anatomy would not by itself be sufficient to create good art. But you should try to develop your sense of what’s going on under the skin. More so, you should perhaps relate what you already know about anatomy, to your drawing.

If we made a metal man we’d probably give him straight cylindrical ‘bones’ and attach the ligaments with nuts and bolts! Nature does it differently, having the skeleton evolve such that even the bones that we think of as being long and straight (the humerus and femur, for instance) are actually bent and twisted. Nor are they cylindrical – the cross-section changes up and down the bone and they have various protrusions where the ligaments attach.

So for example, there are the two protrusions on the inside and outside of the ankles. We’re pretty quick to pick up on points like these if they’re positioned incorrectly. But by positioning such points correctly you can plot your way around the figure. 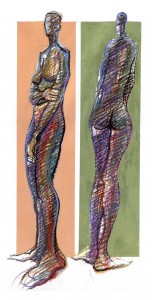 The twists and curves of the bones with these protrusions and the layers of muscle, tendons and fat lying over the top, give the body its form. If the bones were cylindrical, then slightly changing your viewpoint or turning the cylinder wouldn’t make any difference. But you know that you have only to shift your head slightly or for the model to move, for a contour to go and a new one to come.

So how does knowing the figure is hard to draw help you drawing it!? Well it’s rather like admitting the truth when you don’t want to – you are opening yourself to the possibility of doing something about it!

4. Have I put in the ‘points of rest’ between muscle masses?

In drawing a body you can make use both of curves and straight lines. Muscle masses can be drawn curved but often where one curve meets another, there will be a short flattening where the curves meet – a so-called ‘point of rest’. (This principle is explained very well in a book called Modelling and Sculpting the Human Figure by Edouard Lanteri.)

These little flats are caused by stretched tendons just beneath the skin or, in the section of the torso, for example, by the sternum – which is itself quite flat, or if the fingers are splayed open, by the little connecting webs of flesh between them. (You can usually see good examples behind the knee and ankle.) But I think that for Lanteri, these points of rest are motivated by an aesthetic principle – as a way of making a figure look right and ‘good’ – rather than an anatomical one. Equally, they apply also to joining the curves of the facial features. 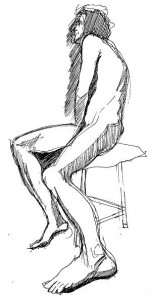 Put another way, if you don’t give attention to them, then the curves ‘bounce’ abruptly from one to another – rather like in a figure made from tied-off balloons.

(Take a look at Modigliani’s stylized figures and you’ll see this taken to its extreme. But I should stress straight away that by this stage he has already moved far away from conventional figure drawing and that his concerns are not with anatomy.)

5. Is the overall ‘gesture’ of my drawing right?

As if the human figure weren’t already complex enough, the forms actually change as muscles flex and we take up new positions. But never fear! 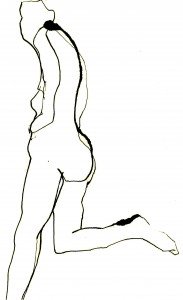 A life drawing is just that – a drawing. When we look at it we don’t expect to see a person. We make allowances visually – we’re charitable to drawings. We want to see the artfulness in them. We want to see how another of our species sees the world, how they felt and saw what they drew and how they used their materials to do it. I believe that what we’re after is an answer to the question: do others see and feel the world as I do, and so in turn, do I see as everyone else? It’s really a selfish curiosity, a need for us to belong, to know that in spite of all our fears, weaknesses, uncertainties and at times our soaring highs, we’re just like everyone else.

An anatomically precise study would probably leave us cold. One that captures the vitality of the pose – the ‘gesture’ – will be one we can empathize with. So a drawing of a figure that has its arms thrusting forwards as if digging with a spade, for instance, will have a certain dynamic. The muscles of the arms supporting the spade will be hard at work, as will the muscles in the thighs. It will be a different dynamic from that of stirring a bowl of cake mix or that of a woman pouring milk, as in Vermeer’s painting of the Milk Maid. 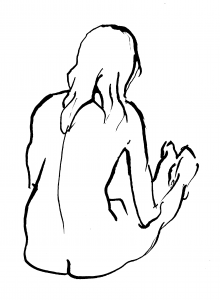 This is what you should aim to express in your drawing – perhaps by exaggerating the perspective or emphasizing the weight of a line. Trying to find that vital lifeline is more important than mere anatomical precision.

Excellent examples are found among the drawings of Honoré Daumier, Jean Francois Millet and Van Gough.

6. Have I given due consideration to any supporting furniture?

Whenever possible, always find time to put in any furniture supporting the model. If (say) he’s leaning against a chair, you need the chair to bring logic to your drawing. Otherwise, the pose might look as though it is being performed by magic (which might, of course, be just what you want)! 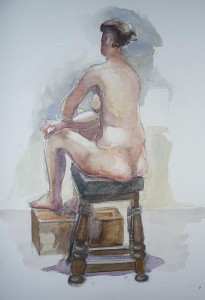 Make sure you relate the objects rather than drawing them as two separate things. There ought to be a kind of union between a piece of furniture and a figure. If the model is sitting on a surface, that surface presses into the flesh, deforming it – often the flesh will slightly spill over an edge. This is the effect of gravity on the mass of the model – the force pulling on all of us, and the one that will ultimately pull all of us down. We spend our lives resisting it, and you can see this in any figure – even a reclining one. Remember also that the model’s weight will deform a soft surface.

all text and images