Before starting to draw, ask yourself the following…

1. Have I already looked at my own hands to find out what’s happening?
If not, then do. In spite of what has been said elsewhere about starting with what you see, bringing knowledge to your drawing can help.

For instance, knowing that the fingers radiate from the wrist (with the carpals – which form the palm and which are more evident on the backs of the hands) – rather than from where they split, and that the middle finger is usually the longest and ring finger next longest, is a good start.

Look to see where the lines of the knuckles come. If you can pin down the ends of the fingers and the joints, then you can plot your way around the hands.

2. Do I know how fingertips and knuckles relate (visually)?
If not, look carefully at the backs of your own hands. 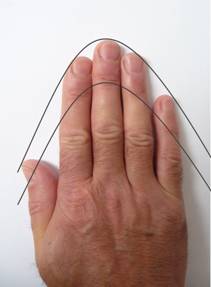 Look first at the asymmetrical curve along which your fingertips lie.  Move up (towards the wrist) to the next set of knuckles and see how the curve through which these pass relates to the first.

What you’ll see there is almost the same curve. This is because the lengths of the distal phalanges (finger tips) are almost the same in each finger – so the curve is practically the same (in reality a little shallower now) as it moves up the fingers. 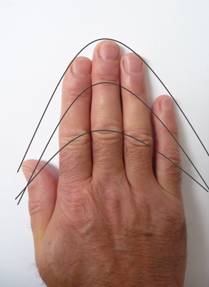 Now move up to the next set of knuckles – the ones half-way down your fingers. Again this curve belongs to the same family as the other two.

(That’s what I mean about rhythms repeating throughout the body.) But the curve here is shallower. This is because the intermediate phalanges in the index finger and little finger are shorter than in the middle and ring fingers, so that these knuckles are ‘pushed up’ a little more in line with the others.

Get this and you’ll start to understand what’s happening with these curves. 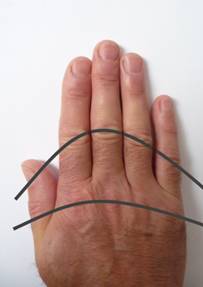 Finally, move up to the largest set of knuckles. You’ll find it hard to see a curve here at all. There is one but now the knuckles of the little finger and ring finger have moved up (towards the fingertips) even more, so the impression is perhaps more of a sloping straight line than a curve.

In fact you can, with slight adjustments, think of 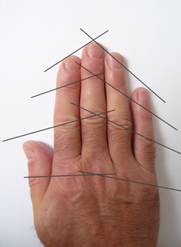 each set of knuckles as lying
along slanting straight lines rather than curves, with the fingertips butting up
to two lines set at an angle.

3. From my point of view, are the hands a focus of interest and if not, do I want to make them so? 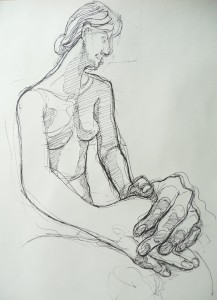 In some poses – particularly those where the hands 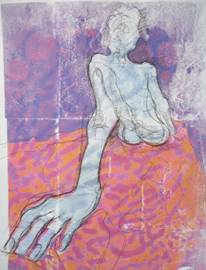 are closest to you, you can play them up – give them a starring role in your drawing. You can even improve a pose – make it more engaging – by simply moving around until you can see the hands. (This is where you ought to be mindful of any drapery, cushions cutting off fingers and spoiling a pose.) If you really want to see how powerfully hands can figure in an image, take a look at the drawings of Kathe Kollwitz.

4. How much time do I need to give the hands to do them justice? 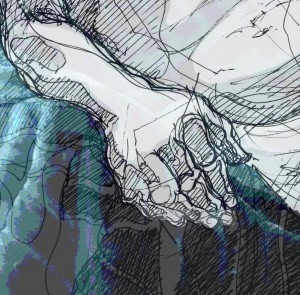 You might have made a great drawing so far, but rush to complete the hands at the end of the session and you’ll run the risk of letting it down.

There is no way of drawing hands other than by giving them the time it takes to get them right. But you’ll find that the more studies you make of hands, the quicker you’ll be able to work them into a complete figure when needs be.

5. Should I draw the hands sooner rather than later – are they such that I ought to draw them early on?

Often, when the hands are locked together within the confines of a pose – at its centre, for instance in (say) a seated pose – it’s a good strategy to address them sooner rather than later.

If you draw everything else, leaving yourself a confined space into which to put the hands, you will have effectively ‘drawn yourself into a corner’. It leaves you no latitude. For then the hands have not only to be drawn well and of a certain size but in a precise position – making them three-times more difficult.

Get them well at the start and it doesn’t matter if you make them say, slightly too big or slightly out of position because you can, by adjusting the proportions of what’s around them, accommodate them into the rest of your drawing.

Once you’ve started drawing you might ask yourself the following:

1. Are the hands more easily seen and drawn as a unit?

Often hands are seen together, clasped or interlocked in some way. If this is the case it can be helpful to see them as a block, and then split down the block by analysing the planes from which it’s made up. 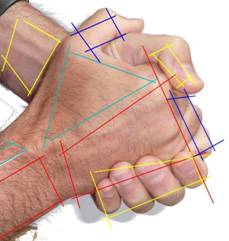 Look for simplicity in the shapes and try to weigh up their sizes relative to one another. This will give a much better impression of the overall structure. So rather than seeing individual fingers, can you ‘take them in’ (observe them) as a block. (Although this might sound like a rather traditional, ‘text-booky’ way to go – and as such, at odds with the philosophy of a contemporary drawing approach – there are times when you need to use everything and anything to help. Making a fairly objective drawing of such complex structures as hands is one.)

2. Are the fingers separated?

As often as not the fingers will be apart. For example, the sitter might have a hand resting on each knee with the fingers of each hand grasping the knees, or the model might be sitting up from the floor with the palm of the supporting hand flat and the fingers splayed out. 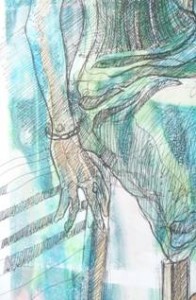 If the fingers are apart, try to avoid building up the hand from the fingers. Look instead at the overall shape and structure and work from the larger forms – such as the palm to the smaller (fingers).

3. What plane do the nails lie on and how are they tilted?

The nails might seem like rather cosmetic, insignificant details when considered alongside the larger forms of the body. But the nails can be very helpful in making fingers ‘read’ as such.

Often fingers are turned slightly to one side and this can be very hard to convey if they’re drawn merely as tapering tubes. The profile of the nail carefully observed can express well, the orientation of a finger. And what is related to this point…

4. Are the fingers coming out directly towards you or dipping away, seen foreshortened?

If so, the nails again can be a great help in giving a sense of foreshortening. It’s the closeness of contours such as those rolling around the knuckles, the contour at the base of the nail and then particularly the curve of the nail tip that can really help in making fingers appear to come out towards you.

In just the same way that you would foreshorten a leg coming out towards you or folding away from you, so you need to do the same for each finger.

Now you’ll appreciate why the drawing of hands makes such great demands on you – it’s as though you’re drawing the lower half of the body again – several times over. 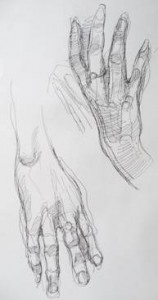 This is of course the most important point of all. Is it possible to make a very good objective study of hands and for it to be entirely lacking in expression?

Well in a sense it is. If you were to look merely at the exterior form of the hands and to render their surfaces tonally without any regard for their structure, by (say) disregarding the bones and thinking all the while of the hand as akin to a rubber glove inflated with a liquid, then I think you might get just that!

Even a fleshy, pudgy hand will have a hardness and tension about it at the fingertips. For though people come in all shapes and sizes and might have hands to match, all have hands that serve to function – to manipulate -, so all are full of dexterity and expression. 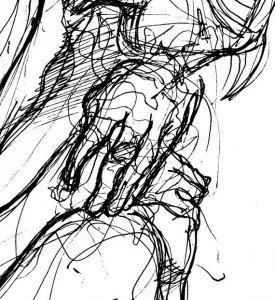